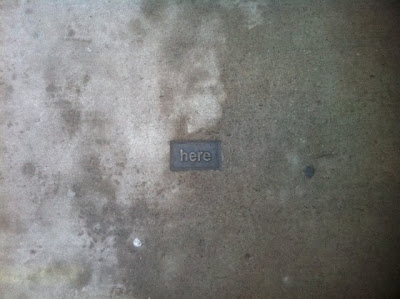 2013 began with a snap decision: I didn’t want to spread my writing thin anymore. So I quit reviewing music – a gig that pays you first and then forgets to follow-up for the actual work – and began covering poetry at the invitation of rob mclennan.

There are perils to reviewing poetry that any self-conscious writer will obsess over. The small press market leaves a critical footprint smaller than itself, meaning the chances are high that an author will get around to reading what I wrote. Ultimately my opinion is my own but the ways in which I get there had better be damned solid. There’s no formula and no bell curve. If poetry had a bulls-eye, it would be Sudoku. People would tackle it on the subway for sport.

I’ve been at it for a year now. My nerves have settled and the joys of reading now resonate a deeper part of my person. Some chapbooks require a bit of research but, whenever possible, I let poetry travel beyond my expectations and preferences to a vulnerable place where I can respond through an emotional reflex. Over the past twelve months, these titles did that best:

(Note: This year’s list collects the top five books I read this year, not necessarily books that saw first release in 2013. I pay dues indefinitely.) 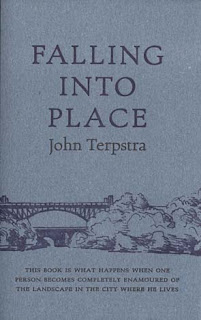 If you’re wondering whether a book that dedicates itself to the city I spent half of 2013 planning to move to represents a conflict of interest, it does. Not that my attraction to Falling Into Place would’ve suffered any had I still been living in Ottawa at the time I picked it up. My fondness for Hamilton predates my wonderful years as an Ottawan. In fact, I lived on the very stretch that awakened Terpstra’s obsession with Hamilton’s landscape; the spot that every personal chapter and amateur anthropology lesson revolves like a circumference around.

Now would I have been drawn to Terpstra’s keen admiration without bringing some of my own to the reading experience? Honestly, probably not. The specifics of Terpstra’s guided tour would’ve intrigued me in spots but gone right over my head in others. At several points I caught myself wondering how a reader entirely unfamiliar with Hamilton (or disinterested in its history) could trooper through, and in those cases, I remind myself that the core idea Terpstra tackles is as universal as it is mystical: the relationship we have to our landscape is worth investigating. 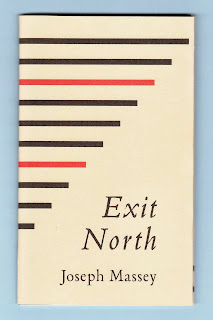 Old news – after a storm –
torn apart between two lawns.

Even the most succinct poem carves an immediate impression, celebrating whatever gentle push from nature proves invigorating to the watchful eye. Neither the ocean-side park in “Found” nor the blackberry thorns in “No Name Pond” recede as a backdrop for human conflict, instead communicating small truths to Massey’s restless mind. And lacking any personal details that might shed light on the author’s clouded psyche, Exit North dedicates itself to a meditation on existential wonders. No ego, no artifice; just a poet in the arms of the natural world, documenting the transient act of being.

Hedges
dredged in
shadow, where


“I say “I” and thereby appropriate the entire language. And trust I am,
through words, gradually to become. A person? An instance of
discourse? Plain as the sky to a fisherman? Beginnings are hazy, below
the belt, where a face is not yet possible though already bespoke by
gravity. But pronouns do not refer to anything in space and time
except the utterance that contains them. Each time, like death, unique.
Not like walking in light that lies like fine dust on the ground, but
language handing me, each time, the gifts of memory, a past. A soul?
While the voice excites intimacies of organic existence, modulates the
frequency of pulses from nerve fibres. Code. Clouded sentence.
Crowded square emptied of bustle by a sudden rain.” 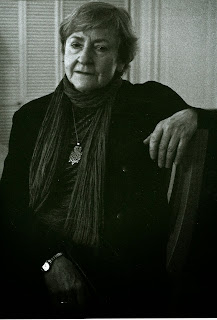 The poem reprinted above – indeed in its first sentence – forms an apex upon which all of OTHERWISE SMOOTH hinges. Waldrop has articulated a voice that is not only conscious of its own devices, it’s yearning to express innate feelings through the confines of that manufactured language. The poem also ushers in the focal theme of OTHERWISE SMOOTH’s second half, loss and death, which lends her “ticks of the watch” awareness all the more acute.

Poem "The creeks" surveys a convergence of raw and abandoned materials: the dark, iridescent wet of a cave, the date-stamped artifacts passed over. Appearing in three prose findings, it’s handily the chapbook’s most loaded entry and perhaps its cryptic key. Underground rivers meet slabs of pavement but there’s a sense of disarray, that these “remains of civilization” lack category, appreciation.

Ample cases of contrast exist in The creeks, between natural and manmade discoveries, forming a mute awareness instead of any environmental concern. mclennan is very good at implying the presence of two persons in his work without letting them obstruct his focus, persons who more often adapt to the currents around them than act as agents of change. As such, over “bashed ancient stone” and “useless, feathered, goods” mclennan’s surroundings reverberate on the relationship between his would-be anthropologists, always teasing a sensual interpretation.

I feel like a prude when people around me think swearing is funny. Coarse language can serve to amplify an emphatic tone but its inclusion often seems opportunistic; less rooted in the context of a conversation, joke or song than thrown in as a cathartic crowd-pleaser or temperament gauge. The high-impact of “fuck” stems from taboo, not any linguistic prowess, and it’s a pretty hollow taboo at that. I had a friend in grade three who missed afternoon recess for saying “fuck”; is that the outlawed image we’re still clinging to? 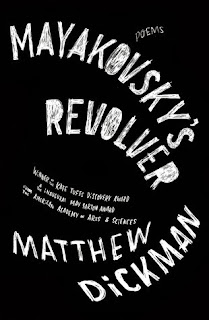 Anyway, Matthew Dickman likes the word “motherfucker”.  Until his sophomore collection Mayakovsky’s Revolver was gifted to me by a friend, I assumed my disdain for frivolous cursing applied especially to poetry – no ifs, ands or buts. But… Dickman’s particular vigor is new to me, his youthful and sprawling free-form spurting forward as if through ritual bloodletting, which is sort of the case. In exorcising the traumas associated with the suicide of Dickman’s older brother, Mayakovsky’s Revolver digs up out of that dark aftermath until “motherfucker”, hardly frivolous at all, becomes a reflex in that circulatory system of grief.

Though daunting (“Anything You Want” is nightmarish), the subject matter sometimes leaps toward the comical end of desperation, where the bereaved author sweetly invents a lover out of t-shirts (“Weird Science”) or abandons a one-night-stand opportunity with an easy target (“The Madness of King George”). The flexibility of Dickman’s gaze doesn’t in any way diminish the intensity of his voice, which opens upon his subjects like the mouth of a volcano.

Confessional and messy, Mayakovsky’s Revolver is not the kind of poetry I’d buy myself. But as a testament to “the gift of literature”, this book has validated a vein of emotional expression I’ve long held reservations about. Sometimes it's best that other people choose what you read, as it opens new doors. My dark horse of 2013.