It’s that time again...
Another dig into my bookshelf to organize and stack, another handful of poetry to revisit. 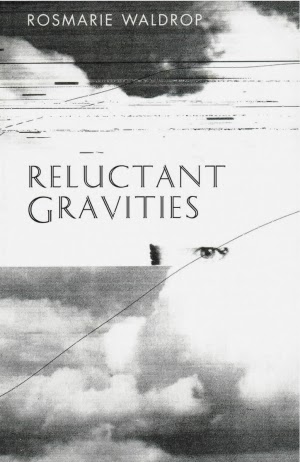 Everything I’ve read by Rosmarie Waldrop, I’ve adored, and that’s in spite of the fact she makes me feel as though I should quit writing poetry forever. This text shares two perspectives, which in “conversations” are organized by subject. One voice is male, the other female, and although their dialogues discuss both common and abstract topics, the fences Waldrop has built up are mostly for demolition. Reluctant Gravities tackles constants like place, desire, separation and change by enmeshing them into the chaos of life and distilling each to its conceptual origin. In “On Desire”, the voices analyze the act of craving by exposing their own, slipping with ease from an academic window of physiology into the latent thought impulses that characterize it. An excerpt:

Don’t you think it a strange coincidence, he says, that
every man whose skull’s been opened had a brain? And
as late as 1889, Charles Brown-Sequard, a famous
French physiologist, at the age of seventy-two, treated
himself for waning vigor with extracts from the testi-
cles of dogs.

What a way to bed hope, she says. With a cherished
pedigree. What I think strange: every photo of the old
house shows wide open shutters when I remember
breathing gloom, the light a mere trickle from a child’s
pail. Of course I know which one to inhabit: memory
loves hunting in the dark. The added light only exac-
erbates the vertigo of inner stairwells. I see you still on
the first step, plucking the word “now” out of the dark
thick with resistance, as if time too had forbidden
chambers.

The only divide separating the male and female voice is snug in the space between their respective paragraphs, as the different stances of Waldrop’s two halves dance upon the expectations of a given subject together. With crisp language that parses the minutia of our thoughts, habits and impulses, Waldrop liberates small, universal truths with imaginative parallels. “On Thirds” touches on the faux pas of crushes while in wedlock:

We are afraid of each other, she says. That’s why we find
a makeshift mistress, a third to be excluded. Then we
think we have cleared the screen, can sit cross-legged
inside language and practice passion according to the
Russian novel. But something, a thin fear of sun-
drown, remains between us, measuring the distance as
if it were the essence of being close.

Although grinding on particulars, these prose poems transcend for bolder, indefinite matters. Sometimes I find myself floored by a certain stanza yet am unable to express its meaning, as if her imagery contains whispered intimations I cannot source. Waldrop’s uncanny way of communicating the unsung space between self and reality waxes further over sporadic ‘Interludes’: single voiced poem-trickles and deeper meditations “On Certainty”, “On the Indefinite”, etc.

Deciphering presents a recurring theme in these conversations, drawing us from evidence of perception to evidence of history. And as one voice’s reliance on memory overlaps with the other’s adherence to patterns, Reluctant Gravities ultimately trusts neither. It’s consciousness that gives words and language meaning; without it, we’ve paths to nowhere. Few books spark consciousness quite like this one. 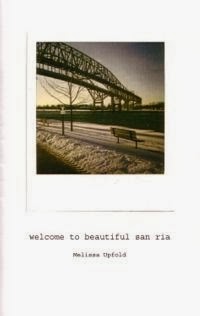 Before I came to know her as the jack-of-all-trades behind *Nickel95, the handmade zine out of London, Ontario, Melissa Upfold was an undergraduate at Carleton University. One of her publications during this time, “Coy”, won Bywords’ John Newlove Award and consequently the publication of this chapbook, which I spotted at Ottawa’s Small Press Book Fair in 2010. Particularly then, I was a sucker for yearning and nostalgic poetry – one flip through the poems of welcome to beautiful san ria and I knew it was for me. Here’s an excerpt from “Pupae”:

The streets stretch barriers
of horizons – lead me in
u turns, into ditches.

I, span across my youth,
a motionless gesture.

Revisiting Upfold’s work involves counting a few years, simply because wired and confessional poetry of this sort captures young adulthood so well. Poems such as “Anesthetize” and “Coy” feel relationships acutely, wholly, the way “The Collapse of January” and “Industry (a study at dawn)” internalize tactile elements of nature and landscape. “Of Arriving Elsewhere” instantly draws me back to the forlorn, agricultural stretches that link one South-Western Ontario town from the next; her gaze caught as much in the reflection as anywhere outside:

The corn does not appear as prolific
as when I was smaller,
nor as golden.
South-Western Ontario blurs into dry
grasses and empty untilled land,
endless blue smears    of sky
that one cannot find
within a cityscape

Upfold doesn’t waste ink questioning why Sarnia is the way it is; she stylizes it to serve san ria’s gloomy backdrop, full of hospitals and dark bedrooms. From “Industry (a study at dawn)”:

The city sleeps with eyes stapled tight,
night lights flashing in every corner.

It is five am and there is no traffic on
Belfour and East – only white noise
and the crunch of dried snow.

Alone one only has cement and
fingers painted red and shiver cold.

Sequenced in three seasonal transitions, the chapbook presents two narratives in bedridden stasis: her own (“After Everything Else”) and another’s, subjected to medical care (“Tumour”, “And even you are non-existent here”). That looming fear of illness injects welcome to beautiful san ria with its direct and haunting language, giving her confessions intrigue. It’s that quality of impulsiveness, not a matter of inexperience, that keeps Upfold’s poetry feeling youthful, and let’s hope she shares more work in the future.
Labels: Bywords Community Library Loans Melissa Upfold New Directions nickel95 Rosmarie Waldrop