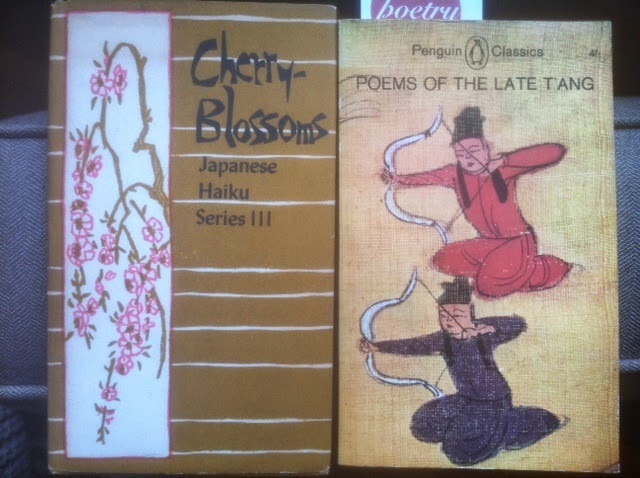 Although today’s selections – Poems of the Late T’ang, edited and translated by A.C. Graham (Penguin Books, 1965) and Cherry-Blossoms: Japanese Haiku Series III (Peter Pauper Press, 1960) – indeed come from my collection, they haven’t yet made it to my bookshelf. That’s how new they are to me. I picked up these titles during my first visit to Store, the tragically named but otherwise cool shoppe on James Street North. (I really wanted to include a link to Store but even after fine-tuning my search, only found links to similarly named shoppes The Hamilton Store and James Street North General Store.)

My interest in Asian poetry doesn’t stray far from what draws me about Buddhism and Taoism: there is a certain concreteness that feels at once compassionate and emotionally neutral. Through a gaze that disregards the binaries of Western thought, our triumphs and sufferings in the natural world get the same nod of acknowledgment as drops of rain on a windshield. All things happen, all things change.

Poems of the Late T’ang is valuable on a few fronts: I’m as unfamiliar with the seven poets covered in this anthology – Tu Fu, Meng Chiao, Han Yu, Lu T’ung, Li Ho, Tu Mu and Li Shang-yin – as I am with A.C. Graham, whose essay on the challenges of translating ancient Chinese to modern-day English is alone worth seeking out. With every revision a doorway to ambiguity and disagreement, the art of translation forms an interesting subtext to these poems of nature, love, politics, age, class and minutia. There are many odes to Autumn, which I welcome though also wonder: is the autumnal association with death responsible for the book's mournful tone or were these poets aware that the T'ang dynasty, generally regarded as China's golden age, was nearing its end?

The works of Han Yu and Tu Mu so far intrigue me most. On the surface their styles have little in common – the former dealing in solemn imagery that communicates an epic and changing nature, the latter issuing brief, four-line stanzas that bustle with vitality. But I’m learning that both edged away from traditional Chinese form; Han Yu for exploring texture over concision and Tu Mu for essentially being a hobo. As Graham mentions, these new paths were often denigrated for having too much in common with Western poetry. Poets like Tu Fu and Li Shang-yin may enforce the best-known characteristics of the late T’ang period but we can learn almost as much from those willing to breach the stylistic norm.

A Withered Tree by Han Yu

Not a twig or a leaf on the old tree,
Wind and frost harm it no more.
A man could pass through the hole in its belly,
Ants crawl searching under its peeling bark.
Its only lodger, the toadstool which dies in a morning,
The birds no longer visit in the twilight.
But its wood can still spark tinder.
It does not care yet to be only the void at its heart.

An astute footnote includes the following: “The ‘void at its heart’ is both the hollow inside of the tree and the Buddhist ideal of the mind freed from the illusion of a material body.”

Li Po put it in a poem, this West-of-the-Waters Abbey,
Old trees and crooked cliffs, wind in the upper rooms.
Between drunk and sober I drifted three days
While blossoms white and crimson opened in the misty rain.

Poems of the Late T’ang gains our trust because Graham understands various schools of thought on translation (going so far as to compare the results of fellow Chinese-to-English translators Arthur Waley, Amy Lowell, H. A. Giles and others) but he’s also keen to showcase a select group of poets that are virtually unknown outside of China. When a comparison involving the much-translated Po Chui-i is immediately closed as such, it isn’t because Po Chui-i didn’t influence this period but because, as Graham states, "he is already the Chinese poet best known and best loved in the West”.

Let’s move further East in our glance and open Cherry-Blossoms: Japanese Haiku Series III. Titled as such because cherry-blossoms live only three days, therefore symbolizing the desire of haiku to provide our transient time on earth with sharp insights, the small hard-cover collection groups the work of Basho, Shiki and others thematically by seasons. Since the winter portion closes the book, I’m incidentally reading Cherry-Blossoms in the Japanese tradition, from right page to left. Compounding that flip-to-any-page-and-read freedom is the layout, which sets four haiku per page against striking black and red ink illustrations by Jeff Hill. Though the images are recycled every so often and not meant to correlate with nearby texts, they anchor a form that tends to float indifferently in less caring haiku compilations. 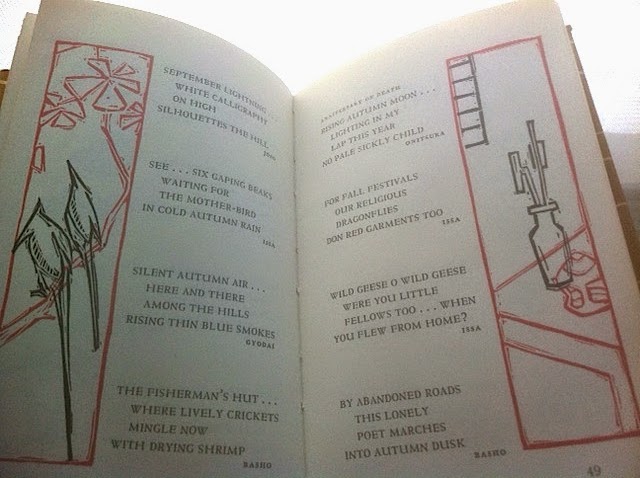 Something I’d like to touch on regarding both titles is the impressive condition I found them in. First editions from the early/mid 1960s rarely appear in used bookstores with only the slightest signs of wear, though I suspect Poems of the Late T’ang and Cherry-Blossoms came from the same bookshelf. Only the amber discoloration inside Poems of the Late T’ang gives away its age (so uniformly that it almost looks intentionally textured) while even Cherry-Blossoms' dust jacket is impeccably preserved. Great finds! 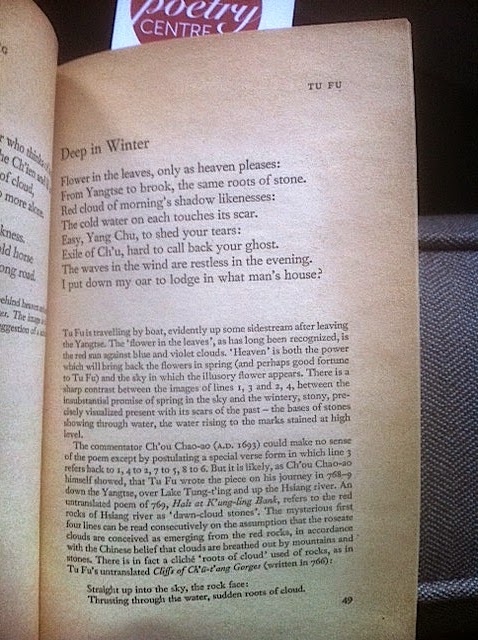