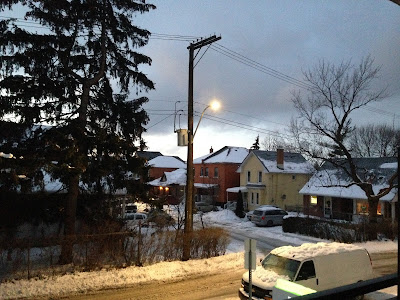 On New Year's Eve we tend to look for empirical data: unbiased proofs that we've progressed or conquered. Here I am, nagged by the feeling that I should write a new blog post but unsure what, if any, meaningful updates I have to speak of. In no small part, this uncertainty stems from the prejudice that unpublished work somehow isn’t worthy of mention. Which is funny, because I don’t feel that way when I hear authors I enjoy discuss new and unreleased work. I guess we’re always hardest on ourselves.

On the record I had a handful of poems published, wrote some reviews and read at grit LIT. But off the record (or should I say, on my laptop), 2017 was quite productive. I carved out more time for writing. I accepted things about myself that made space for new poetry and, concurrently, a better understanding of what I was writing in 2015-16. Even did some pro bono research work for one of my favourite poets.

Since spring, I’ve also managed to push forward on things that, for a period, seemed destined to remain incomplete. The first is a "micro-script" I started in 2013 called "Niagara Grayscale Suite". It amassed into a bunch of poems, some of which were published by the likes of Great Lakes Review and The Steel Chisel. I never found a definitive sequence, probably because I was unhappy throughout its creation and pretty much bailed on the project after moving to Hamilton. Coming back to these poems years later – and seeing some good amidst the ruins – I aimed to distill that bleak time to its essence. The result is micro-poetry, with each entry ranging between 25 and 40 words. Also completed is a larger manuscript that began in late 2014, dipped into inaction throughout 2016 and came full circle this summer. Parts of "Cannot transform myth" have gone public in places like text, Ottawater and The Steel Chisel. It feels good to tie a ribbon on these efforts and know they’re either buried or ready to dance.

But back to the present: all fall I've been focused on a new manuscript that should keep me busy throughout 2018. Whether it'll provide a few empirical proofs to buoy my confidence this time next year, who knows. I'm just grateful to be inspired and wishing the same to all of you.