A Musical Companion For the Unnamed (Vol. 1) 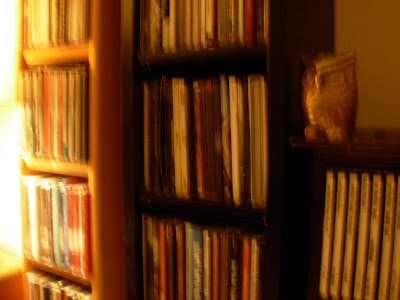 Never am I more selective about music than when I’m writing. Whether it’s a classical piece, a slab of droning ambience, pop music or, occasionally, the atmosphere of a quiet room, the tones that cast light on my thoughts must also sustain concentration. More often than not, the chosen music should augment whatever memory or understanding I’m trying to sculpt without distracting me; meaning on a productive day, I might play the same song on repeat a dozen or so times while fine-tuning a stanza.

When poet and publisher Amanda Earl discussed a shortlist of artists and albums she’d let breathe beneath her work (on Dani Couture’s Poetry Playlist feature), it dawned on me that perhaps many poets use music to sanctify their writing environments. Why this surprised me, I have no idea.

Now as someone who writes both poetry and music criticism, I realize that mixing my two obsessions into one blog-post runs the risk of boring everyone but myself. Bearing that in mind, Amanda’s words reminded me how a piece of music can entangle itself around some curious pocket of one’s mind in such a way that no passing of time can subdue it. And once a writer has bonded an idea to that particular piece of music, it forever lives on as a souvenir of some half-doctored time and place. Read Amanda Earl’s Poetry Playlist (courtesy of www.blackbearonwater.com) based on her long poem Welcome To Earth and notice how, for this particular piece, she chose predominantly folk-based artists to inspire it.

With over twenty poems completed for my own burgeoning yet chronically untitled poetry book, I thought this might be an ideal time to spotlight some stirring sounds that have guided my work thus far. (Ed. Initially I'd embedded videos for each song within this post -- it's something I do every other day without issue on my music blog -- but, here on DeadLetterBirds, only the code will appear. So instead I've included links within each song title to the music. Sigh...)

For two months after I married, I was consistently under the weather. A promotional copy of Jacaszek's album arrived for me during a lengthy bout of bronchitis and became a living soundtrack to my voluntary seclusion. A poem I wrote during this time was inspired by Glimmer's creeping symphony.

Unlike the other albums represented here, The Age Of Adz hasn't, as a whole, inspired my writing. In fact, I'm not a fan of most of the album. But this opening song from Mr. Stevens' last full-length was all I needed to inspire the mood of "Masterpiece Anon.", a poem that is due to be published over the coming months.

This song enabled one of those rare moments where I wrote the entire backbone of a poem, unrefined but ready for editing, over the course of an hour.

This is but one track from a compilation that has collectively inspired a handful of poems - some already published, others not so much. SMM: Context is a yearly pursuit by the label Ghostly International to merge classical composition with electronic instrumentation and vice versa. It's really beautiful stuff.

Remember what I wrote about songs needing to sustain my concentration? Well it helps when the song in question rolls along - stretching, deconstructing and reassembling - over a solid twelve minutes. Its length is really just a bonus, though.

For additional Poetry Playlists check out largehearted boy, a blog that thrives where music and literature intersect.