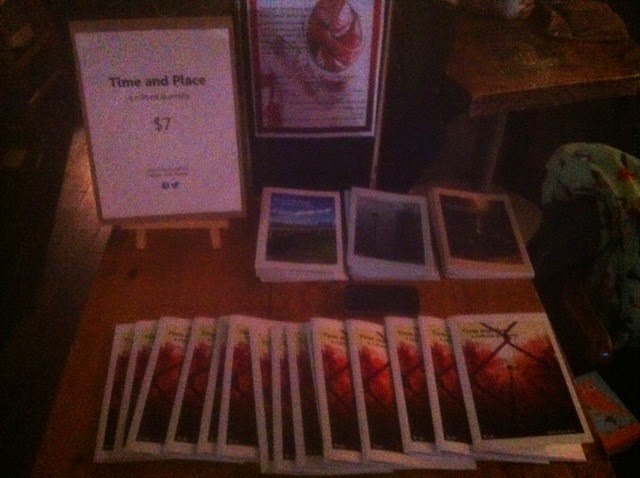 This spread of chapbooks greeted me upon entering Homegrown Hamilton last night, where Ninth Floor Press was launching their latest issue. It was fun to see Issue #1 again and reminisce, for a moment, about finding it at Mixed Media that first December morning as a Hamiltonian. Almost a year in town, now. It was great to meet Ed Shaw and Nancy Benoy, the friendly couple responsible for gathering, binding, shipping to the printers and showcasing their city’s local artisans. The evening’s mood reflected that labour of love, with friends of the press and contributors sharing in stories, songs and visual art that often touched on Hamilton as muse. 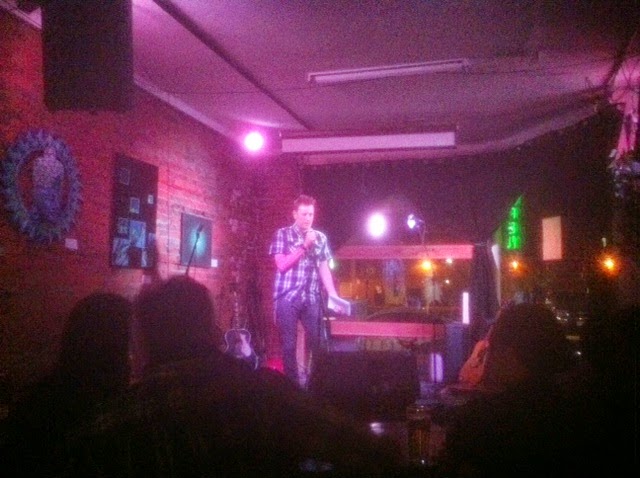 This is virtually where my photos of the evening end, with Shaw discussing the chapbook’s focus, although some better shots are popping up on Ninth Floor Press' Twitter.

I didn’t necessarily expect to see familiar faces, as the list of contributors hadn’t been shared in advance, but spotting Hamilton Spectator’s Jeff Mahoney and jack-of-all-trades artist Tor Lukasik-Foss gave me high hopes – and neither disappointed. Mahoney led the way with a casual but perceptive story from his boyhood days in Montreal while Lukasik-Foss’ “Banana Bread” recipe was hands-down the comedic highlight of the evening. (Note: we were all pretty fortunate to have a professional like Mahoney start things off, as he didn’t hesitate to comment on two patrons who had continued to chat loudly in spite of the fact that everyone else there was trying to listen. The couple soon moved on.)

Strangers became familiar in no time, too. I met photographer Dave Pijuan-Nomura who, in a nut-shell I’m sure, shared the three-year “upheaval” that ended with his family moving from Toronto. His photo published in Time and Place contains two major reasons for their move: his son and Hamilton’s vast green-space. Amanda Dudnik and Sonya de Laat also spoke eloquently about the personal motivations behind their visual work, enhancing my appreciation for craft in different mediums.

I read the featured poem "A homecoming," and also "The Smyth Ave Nightly Migration", which is due to appear in Quiddity. It was my first time reading in a year!

Aided by the chapbook’s meaty concept of when and where, the launch welcomed artists to bond over their creative impulses. It was a rare reading to walk out of, feeling as though I now knew these contributors as everyday people beyond the guise of their art.

The new issue of Time and Place is for sale at bookstores and lit-friendly shoppes around Hamilton. For more details, check out this previous post.