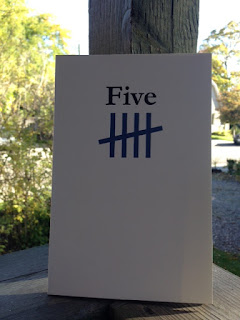 When I chose to pair Five with my morning tea last Saturday, I didn’t intend to re-read all 60 pages, front to back. The collection, featuring work by Ottawa-related poets jesslyn delia smith, Jeff Blackman, Cameron Anstee, Justin Million and Rachael Simpson, seems like an ideal candidate for drop-in, drop-out reading, since each poet offers a small, chapbook sized taste of their best, recent work. Alas the convenience of navigating Five is almost too encouraging, as the spoils of one poet’s selections snowball into anticipation for what comes next.

All contributors pull their own weight, although the gravity naturally varies with each voice. jesslyn delia smith’s poems reach for equilibrium, cautiously outlining the stakes of intimacy. Her meditations are grounded by the dynamics of environment — the house she’s learning to share with someone — and orbit in tight proximity. Plainspoken and thoughtful, the bed-making ritual of “wait” captures her tone best:

the longing is fresh with the laundry
on clothespins, waiting to dry

i fold sheets alone
at the end of the day

each layer of cover from
rainfalls seeps into the next

each flight leaves the comfort of earth
without you in the plane,

But the heart of Five rests in its interstices, the contrasts between authors that keep each page fresh. Jeff Blackman’s eclectic manifestos “Whales In Popular Culture #2: Prove Me Wrong” and “The One World Government’s Behalf” present one such seismic shift, framing slivers of zeitgeist within our canted, collective dysfunction. Blackman’s exuberance leaves an indelible imprint on Five, in part because it’s a trait his colleagues don’t trade in (much, here, at least) but also he wields it in ways that are alternately funny and reflective. Both results apply to “Year of Well,” a freeform collage of impulses targeting the paralysis of working-class life:

Hey CAPSLOCKER, hey faithful, hey newspaperman; tell me: what’s the
command for love? Now it is time for someone to almost — BEHOLD THIS
STATUE WITH ITS LIP BIT

Fierce workday of breath, I’m begging: what do I do now I’m in?

We look so poor arguing our ways towards the beer store. 7:28 another wet-
mare worke me: Omen. “Omen!” my mind gaped.

Me? I’m as I was as the day before: broke, though admittedly sheltered, clothed
and fed, something else deficient I’m sure.

Calling out staples of North American culture, this poem relates feelings of inertia and restlessness almost subliminally, without dwelling in either. On the other hand, his “untitled bird poem for Kate” is tender and un-excerptible and you really need to read it.

As the flurry of press made clear surrounding this book and last fall’s An Accord of Poets multi-city reading tour, these five writers are also friends. It makes sense that similar themes will pop up but less expected that they prove advantageous, helping to distinguish these voices as they deal with rites of domestic passage. Cameron Anstee’s approach to sharing a home is less specific than smith’s but more cerebral, his stanzas whittled down to essential imagery around the existential question: what effect will our experiences leave on the tangible place?

the house advances and remains, extends
the casual arrangement of what we bring and find

the house is telling and re-telling

the house suddenly has been years

In “The House”, excerpted above, Anstee translates the weight of brick and mortar permanence against his perspective as a transient resident, passing from one margin to another. “Late January” is another poem that should stop readers in their tracks, a sort-of hymnal to Ottawa winters I remember vividly from its appearance in a Peter F.  Yacht Club issue. But just as Five contracts around Anstee’s quiet awareness, it’s about to push outwards again — this time into Justin Million’s acreage of freeform exorcisms. His poems are the most free-wheeling and volatile of the bunch; yet unlike many who take on Al Purdy’s beat-slash-confessional tone, Million’s excesses never spill into self indulgence.

now
have the balls to be
presumptuous about 60

or trumpet what’s happening to you
now

your own decade long god,
that toughest first two thirds
of the nail

hammered and ten years broke and its failure of women and I feel two
decades ambered. Oh beauty, don’t move —

It’s hard to cut Million off when he’s on a tear and each of his four poems peddle that go-for-broke energy. “60/30”, partially excerpted above, barrels toward self-loathing at a clip most readers might find clumsy, if not for the precision with which Million inserts external narrative to alleviate bouts of self-analysis. “Simple Villain’s Hero” and “a bird or what’s worse in the house” are likewise populated with gazes beyond that of our inebriated protagonist, either sympathizing or enabling the many ‘brown lights in gut’. He skims from one tarnished insight to another, often disassociating from a subject altogether before running into a parallel, complimentary tangent, but his style is realized, unique.

Five closes with Rachael Simpson and, perhaps unintentionally, fulfills the collection’s fluctuating pulse from resting heart rate (of composed, traditional verse) to palpitations (of excited freeform) and back again. Simpson writes after the rustic, inspired by wild tansy, carved up sheds and skillets hung from nails. The imagery is tightly framed and borderless, either captured in the city or perhaps one of Ottawa’s vista-rich, outer townships. But when such visual textures get strung up in her knack for rhythm, stationary poems like “Skillet” and “Pitch” take on a robust and auditory life. From the former:

How gratefully you receive them,
reach for what you’re given:

There’s an ease about your hands
as you have for any tool.

Better yet is “Corrode”, where the organic rephrasing of grass “creeping up and through the half-rolled window” carries a stark but kinaesthetic effect on an abandoned scene. “Wild, domestic” ends this collection with a memorable gut-punch, and is one of my favourite poems of last year.

As with any multi-authored work, Five teases and pulls the reader’s attention around sections that become intimately dog-eared. But that unevenness is tempered by a keen understanding of how each writer differs and thusly, how best to sequence their work. Thematically Five captures the unevenness of approaching thirty, the critical age these writers all hover around. Decisions become deliberations, relationships carry sharper wreckage and passions struggle to align with some semblance of a career. Well after Simpson's last poem, I find myself anticipating what comes next.

Serendipitous post-script: This review coincides with the anniversary of Five's release and Apt. 9 Press is selling copies for 50% off! That's crazy. Pick one up here.