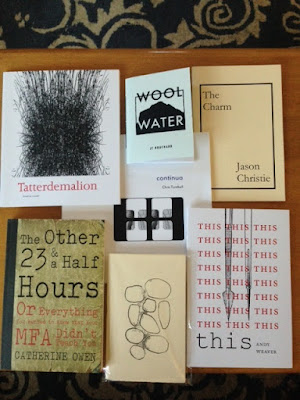 2015’s Meet the Presses was just the right calibration of different and yet familiar. There were a few new presses on hand, including the sparsely designed, women’s-only Canthius Journal and the eye-catching work of Desert Pets Press. But otherwise, a lot of stellar presses from last year were back with new wares: Mansfield Press, Anstruthers Press, BookThug, Coach House Books, Little Brother and Puddles of Sky Press, among others. I arrived a bit later this year and missed the announcement that Lissa Wolsak won the bpNichol Chapbook Award. Congrats!

Since much of my experience last year can be reapplied here, I'll save you the atmospherics and get right to the spoils. I picked up Catherine Owen’s The Other 23 & a Half Hours... and had Wolsak & Wynn publisher Noelle Allen fill me in on some of the great readings I missed during Owen’s recent tour. I eagerly collected Nelson Ball’s new chapbook Small Waterways from Cameron Anstee and his Apt. 9 Press. I chatted with Will Kemp and Nicole Brewer about the hard work (and subsequent good fortune) that has transformed the words(on)pages table over the past twelve months.

rob mclennan was on hand, representing both above/ground press (which received its second consecutive bpNichol Award nomination in collaboration with poet Jason Christie) and Chaudiere Books. Within a minute I was given three new Chaudiere titles: Tatterdemalion by Jennifer Londry, continua by Chris Turnbull and this by Andy Weaver. Many thanks! (Note: all three authors will be reading at the Toronto launch on Wednesday, December 2nd. You should go.)

Less predictable than the presses in attendance were which writers I’d see roaming vendor tables. I was pleased to cross paths with Phoebe Wang almost immediately. After running into some lovely people I typically only correspond with via Twitter and seeing other familiar faces I hadn't the excuse to approach and make introductions with, I circled back for JC Bouchard’s Wool Water and then journeyed home. Now I'm ready to hibernate.