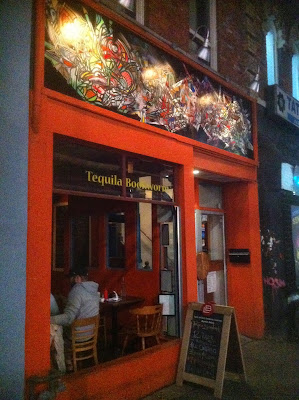 Tequila Bookworm took full advantage of a balmy October evening, opening its glass-panes to Queen Street West’s busy sidewalks and dimming the lights to a summer’s glow. Nestled a floor above the chattering of a healthy weeknight crowd, writers and literary enthusiasts gathered to celebrate The Quilliad’s second issue. 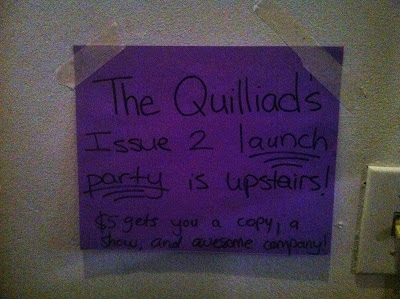 Once upstairs and inside the narrow blue room, I was greeted with a contributor copy as well as a few unfamiliar but friendly faces. Among them stood Sarah Varnam, The Quilliad’s Editor-in-Chief, and Devin P.L. Edwards, who handled the event’s audio needs. After guests had seated themselves in strings of theatre-styled bucket-seats or rogue office furniture, Sarah invited a procession of writers to take the floor and read. The first set featured Christian Quaresma, Jessica Bebenek, Calista Michel, Devin P.L. Edwards, Dylan Wagman and I (reading my accepted poem “Degrees”). 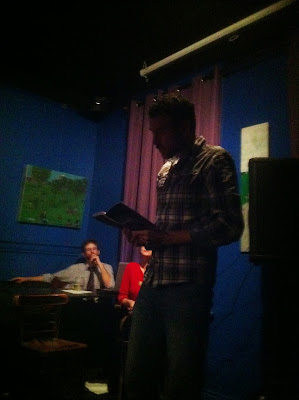 The second set marked an interesting turn, featuring readers who could not make the trip (with at least one hailing from British Columbia, another from South Korea) performing via audio files. Of the four renditions, two arrived too late to be “normalized” and were consequently pretty quiet. Even so, the absence of a tangible reader invited a more meditative experience. With nowhere in particular to focus one’s gaze, audience members stared off or down, visualizing the readers’ evocations between sips. The passing of streetcars sporadically interrupted their voices but that outside ambience only seemed to reinforce a pensive intimacy among listeners. I found the recorded segment surprisingly effective, even though Yusuf Saadi’s reading of “August, After Moonset” – perhaps my favourite poem from the issue – was impossible to hear. The other disembodied voices belonged to Shannon Campbell, Joe Gans and Gail Hulnick. 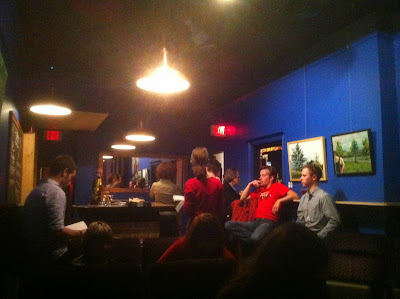 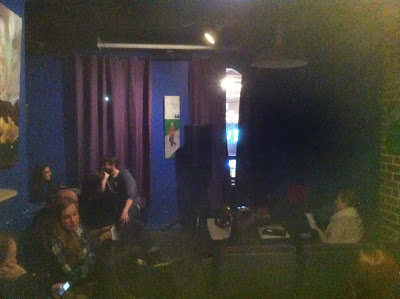 I took the pause before the third and final sequence of authors to visit a merch table that showcased several projects on the go. Alongside copies of The Quilliad’s inaugural issue, a chapbook by Sarah and visual art by Devin sat beautifully hand-made titles from Jessica Bebenek’s Grow & Grow micro-press. A quick flip through Consanguinity (by S.E. Chaves, a Quilliad editor who was unfortunately absent) and Infiltration (by Ben Groh) left a lasting impression. (Had my bag not been sagging under the weight of the many records I’d purchased earlier that day, I might’ve had room/cash for a few!) 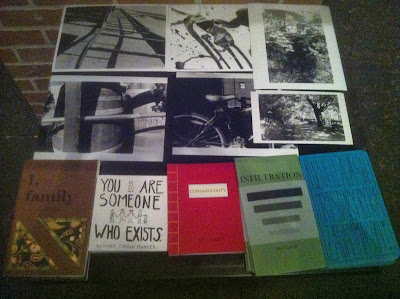 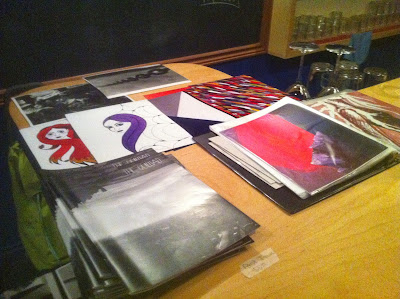 Formalities came to a close with readings by Julia Wong, Lizzie Violet, Rachel Fernandes (who made the trip from Ottawa) and Jack Hostrawser. There was talk of fresh drinks and socializing but I – as well as my wife, who surprised me with a sudden appearance! – had to find our highway home. On the way out I ran into Rodrigo Marti, an excellent Toronto-based, mixed-media artist I hadn’t seen in some eight years, who was out to support the small press crowd. Despite missing out on the after-party, the launch left me feeling renewed and excited for future readings. Thank you, Quilliad team!

If you were unable to attend the launch, Issue #2 is now available digitally and physically through The Quilliad’s website. In addition to the written work, this issue contains a lot of beautiful photography by Scott Williams and Sean G. Marjoram. Be sure to seek this out!
Labels: Community Devin P.L. Edwards Grow & Grow Jessica Bebenek Published Works Readings Sarah Varnam Tequila Bookworm The Quilliad Toronto