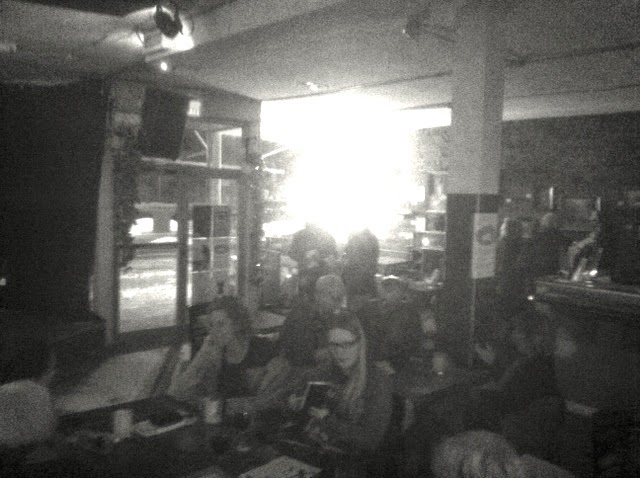 (LIMITED SCOPE REVIEW: THE BELOW NOTICE HAS BEEN SANITIZED TO PROTECT CERTAIN NAMES AND ORGANIZATIONS THAT ARE TRYING TO DO THE RIGHT THING.)

As far as I know, Hamilton does not have an exclusively literary open mic night. There are sign-up slam competitions, amateur comedy sets and even an anything-goes Thursday night podium at Homegrown Hamilton, but no public means for writers (young or old, masters or novices) to try out new material for a committed audience. This absence, in a city otherwise blessed with talented writers and selfless volunteers, seems temporary, a glitch just waiting to be fixed. I’ve even heard some established authors mull over the promise and challenges of putting together a sustainable open mic night. My position was one of why not until a reading this summer in Toronto, where I saw those challenges personified in the open mic portion of a reading at XXXX. Now, I understand my colleagues' trepidation. Now it's more a question of how.

Firstly, I should note that said venue was packed: several rows of occupied chairs all the way back to sofas that lined the gallery walls, with many people crowded next to the refreshments area. The space was small, which made the collective energy all the better. Comedian/writer Shane Murphy and I missed the first forty or so minutes, intentionally I’ll admit, and walked in at the beginning of XXXX’s set under the assumption that open mic period was over. But the order of readers for the evening, always something of a mystery, proved quite telling: the two featured readers, XXXX and XXXX, were sandwiched in the middle of two open mic stretches.

I balked at this, anticipating that half of the audience would bail as soon as XXXX wrapped his set. And sure enough, a number of seats were vacated once the two headliners had finished. But I don’t blame the organizers or those who left. I can't even blame the open mic readers, many of whom also took off once their five minutes were up. Shane and I stuck around (as did XXXX, in a show of respect) for an experience that helped me better understand just how perilous open mic can be.

Now far be it from me to tell anyone what poetry should be – all participants were in their rights to read anything they wanted – but, as an audience member, I can critique that when the material suffered, it wasn't due to creative dullness but a lack of personal awareness. For every poet who shared narratives of humour, hard-fought clarity or compassion, I reckon there were three trying to get monkeys off of their backs. Yes, the arts can bring personal or political strife into an inventive and meaningful conversation, but that conversation acknowledges a second party – in this case the audience. Many participants seemed unaware of this engagement, using the opportunity to air grievances about the Middle East, men and other suspicious generalities. When a reading lacked subtlety, there was an enormous imprint where it could have been, trampled over by venomous f-bombs and acoustic guitar abuse. Even if the unwieldy emotions on display were measured as a quality of performance, the work itself neglected listeners’ imaginations in order to satisfy personal itches. Polarizing can be progressive, I kept reminding myself, but there was little to interpret with any rose-tinted reaching.

I know how judgmental my criticisms sound but reflect on them openly anyway, hoping to pinpoint what felt so abusive about being on the receiving end of some readers' emotions. I'm not assessing this one, isolated open mic event to determine should such an event exist in Hamilton but on the more practical grounds of who would attend it. I mean, more than once. I’m grateful to XXXX, host XXXX, the XXXX team and yes, the participants for putting together such a memorable night. But “memorable” doesn’t mean I remember a lot of it fondly.

I wonder if Hamilton can do better. However tantalizing the idea is of assembling an unpredictable line-up of diverse voices and taking the ride, I now see how a screening process helps to establish an artistic benchmark. (The term “screening process” sounds monstrous, like the first blind step toward segregation, but bear in mind: as an unknown writer with no book publications to his name and only a handful of reading engagements to speak of, I would be buzzing about the screen as well.) And maybe that’s the way it should be. Maybe being solicited, having to adhere to a predetermined theme for each event or auditioning your text in advance instills that micro-sized awareness of decorum. There’s room for subversion, depravity and strong opinions but it has to serve literature before ego. Otherwise the line separating open mic from group therapy tends to blur.

Stepping into the light rain, Shane and I struggled to hurdle separate poles of awe; our minds buzzed from the magnetic featured readers but our jaws slack, almost shell-shocked, from the open mic wilderness. While exchanging highlights and moments of exasperation, we all but forgot the real unknown talents, those several poets that represented themselves and their crafts well but had no stature in such a chaotic arena. That's the group of writers an open mic in Hamilton should give voice to!
Labels: Hamilton Open Mic Raw data Toronto