A visit to The River Trading Company 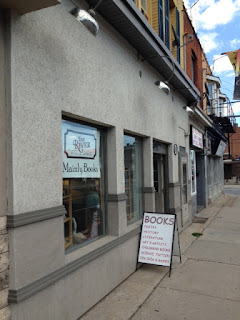 In June The River Trading Company moved from its Parkdale, Toronto location to settle in Hamilton’s Gibson area. On Sunday, I finally visited both bookstore and neighbourhood.

It isn't often that "Poetry" gets top billing on an outdoor A-frame sign but its placement, much to my relief, was not false advertising. A glass-cased display shelf at the very left of the doorway displayed early chapbooks by the likes of Stephen Cain and Gregory Betts, while the bookshelf to my right was dedicated, ceiling to floor, with poetry. I was barely two feet inside the store! Mary, one of The River Trading Company’s co-owners, kindly offered me a tour while Thor, her canine clerk, checked me out. There was a full wall of bookshelves for History (though carefully separated by periods, conflicts and geography), another full stretch for General Fiction, plus inner aisles classified according to Science Fiction, Mystery Thrillers, Speculative Fiction, Food & Drink, Classic Literature, Plays, and even a tribute shelf for Cold War era literature.

But back to poetry for a minute. Selection ranged from hardcover Irving Layton and Earle Birney to recent releases by BookThug and Nightwood Editions. There were many interesting, unfamiliar titles that I didn’t even explore because my stack of must-buys grew so quickly. Top picks included Between Tears and Laughter by Alden Nowlan, bury me deep in the green wood by rob mclennan, Sylvia Plath, Her Life and Work by Eileen Aird and Concrete and Wild Carrot by Margaret Avison. (That last title was especially pleasing to find as it’s the book Avison was touring behind when I scrambled through a campus downpour to hear her read at Western University. It was my first poetry reading.)

At one point I must’ve stumbled from Biography into the Well-Being section because my eyes landed upon two Alan Watts books, Meditation and The Wisdom of Insecurity. I snagged them both. The general condition of books I handled was impressive and their prices considerably lower than Toronto competitors like Balfour Books. (I haven't read a critical study of Sylvia Plath in almost ten years but, at $1.99, why not get a refresher course?)

At check-out, Mary spoke of Barton Street’s potential — the architectural remnants of Hamilton’s once glamorous main street and the positive ways it's slowly turning around. (Exhibit A is next door at 541 Eatery & Exchange.) I was sure to tell Mary about grit LIT, Lit Live and a few other literary gems around town.

In spite of Gibson's mostly shuttered storefronts, The River Trading Company singlehandedly rewarded my bus ride to the city’s North end. As well as selling antique art prints, figurines, CDs, records, old magazines, scores of literary journals and other oddities, they're sure to spice up Hamilton's used book hunt, a sport that totally exists (if only in my mind). I've included a few additional shots below: