What better way to kick off my inaugural micro-review than by featuring a true micro-chapbook? Of all the small pleasures a new phafours press release brings, the obvious has to be its good company. Publisher Pearl Pirie gives customers the option of buying titles individually or bundled alongside others of a given launch. (It's a handsome package and, um, $5; need I say more?) In my case, having picked up the Fall 2014 series, that meant getting tiny texts by Sanita Fejzic, Phil Hall and Pirie herself, each contrasted by how they choose to inhabit their six-page confines. 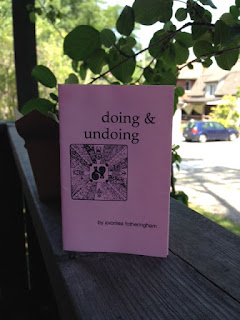 Avonlea Fotheringham’s doing & undoing stands out from the pack as a new voice, one I enjoyed in this spring’s (parenthetical) zine. There’s a directness in her work that embraces possibility instead of limiting it, making the phafours constraints an opportunity to further hone.

the books will settle
down to rest, complacent and
content, the record
skips and blushes at the note;
the walls weep, they are so touched

At first reading, the poem doesn’t have the right to resonate as it does; its five lines of seemingly pedestrian description seek no entrance or exit. But that’s enough to entice, floating without the pressure of strict punctuation or mediating gaze. If the first two poems represent establishing shots, rooted in the sounds and objects of concrete space, the following four increasingly flit the psychological transit-ways of a relationship. Fotheringham sparks these poems with proofs, either via blunt assertions or “if”s and “as long as”s that begin as if midpoint in a conversation. But no sooner has she made a case, her careful logic and subtle use of consonance building steam, when the whole thought process breaks off. Much like the title poem, which finds “algorithms” in communication that enable patterns of conflict or peace, Fotheringham draws out pensive ideas by resolving at the start and then deliberating. As a result of that process, doing & undoing elucidates without wasting a word.
Labels: Avonlea Fotheringham Phafours Press Poetry Reviews