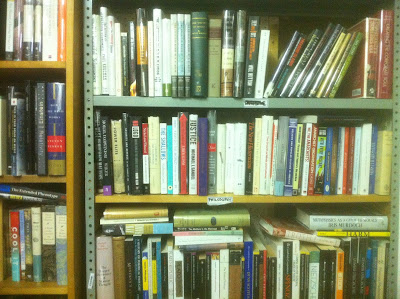 My library is not expansive, which to me is another way of saying it isn’t a chore. I have a bookshelf unit as tall as my 6’1” frame and, carrying the collected interests of both my wife and I, it’s jam-packed. I’m often confronted by the lurking temptation that, with a second unit or maybe a series of wall-secured shelves, I could vastly expand and re-organize my wares. But paper’s heavy and, frankly, we move too often.

So instead I lower a cup of tea and cushion to the floor and perform check-ups, usually once a year. Books make little towers and, for an hour or so, mix it up. A few don’t make it home. It’s the price of living light, or trying to: constant revision. A good cleanse usually frees up the space of four to five thick hardcovers but even lackluster check-ups – the sort that amounts to a dusting session – don’t feel like wasted time. It’s my garden, tucked against the apartment’s most generous wall. Here I’m tending to old friends.

With their thin and often wordless spines, chapbooks tend to hide the best. As I reorder and assemble some, I put others aside – their covers almost a surprise to lay eyes on! The first two are Leah Mol’s And I’ve Been Thinking Dangerously (2011) and Sandra Ridley’s Rest Cure (2009), both from Cameron Anstee’s Apt. 9 Press. I’m always sucked in by Mol’s first entry, “Certainties”:

"I can’t tell what’s real with you and what’s not.
Text message from M., to whom I lost my virginity" 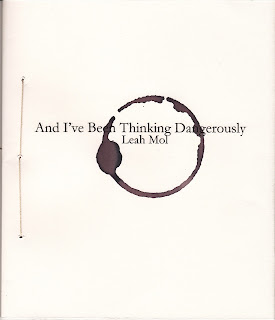 One might mistake it as a preface but And I’ve Been Thinking Dangerously collects catharsis from a volatile assortment of untitled short stories, a one-off list of stimulating buzzwords and a diary entry from 1996. Though prone to a whimsy that strays into speculative character sketches, Mol’s stories tug from personal experience and usually end in reflection.

“And I can’t help but see myself in the third person. I check my hair in shadows and see my reflection as a stranger. No look is unpracticed. I am so aware of others’ eyes that I no longer have my own.”

Arriving at the tail end of a story about her neighbour, the above excerpt captures how Mol’s confessional style keeps her readers hooked. And I’ve Been Thinking Dangerously is surprising, a tad unstable and wholly deserving of its title.

In the spring of 2010 I contributed my first article to UnFolding, an Ottawa area magazine-cum-website that sent (and actually paid!) me to review a poetry workshop. Facilitated by Sandra Ridley, whose Rest Cure had just recently launched, the class covered structural choices, balancing the figurative and literal, being cryptic versus being clear, as well as advice for prepping one’s work for publication. Yes, I still have the handouts.

So I’d brought a few poems that, naturally, I thought were great. When it was my turn to read a working draft of choice, the experience was… deflating. Turns out I’d never read those poems aloud and, in doing so, spotted how clichéd and rhyme-dependent they sounded. Afterwards I remarked as much to Ridley, who consoled me by saying “rhymes are coming back”. 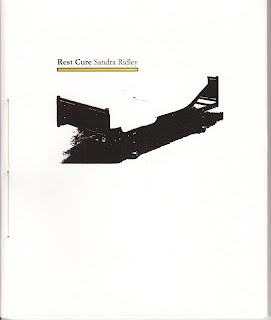 I mention that story because Rest Cure feels surgically divorced from her warm character and comprehensive notes. Fractured and sometimes nightmarish, Ridley gives a cautionary tale of lust, centered on a female protagonist whose yearning is subjected to repeated atrophies. Excerpt:

“Tremors in her pulse as she is laid out again :
his hands pulling until she is lying along the length of it
& she is looking at a light, a light, a light & nothing is happening above her
& yesterday was lamb’s wool under her walking shirt
& wasn’t it or weren’t they
& didn’t she hold a piece of him when she came here
before she slipped listless & antiseptic.

It’s a fairly fatalistic text to revisit. Still, with her line breaks, which in some cases create large swathes of space, interrupting the consciousness of her narrative, Ridley’s poems take on full-bodied, romantic aching, only to be dissected with the most clinical language. I always find it a good challenge.

Sorting these titles back into place, I recognize that these bookshelf check-ups are less about managing space than soaking up the words I live with. Besides easing the buyer’s guilt attached to getting new books when you still have unread ones waiting at home, this practice keeps me grounded. The better familiar I am with the complexities of each rarely seen spine, the more likely my bookshelf will thrive with titles that widen my comfort zone.

The motivation behind collecting – anything, really – can be likened to filling a blank horizon with inspired muses; the desire to create a richer lens to look at life through. Hopefully I'll find some spare time to share more of these older titles as the weather cools. I owe them as much.