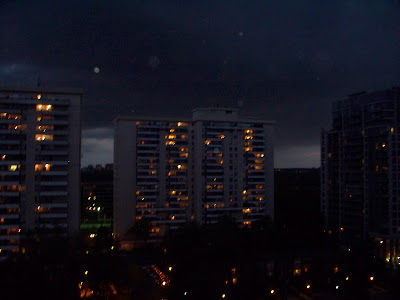 This spring I began reminiscing about Toronto, which isn’t unusual. Ever since moving to High Park with my girlfriend in the spring of 07, I pretty much expect a few sunny days each May to induce the excitement and confusion of that first season in Hogtown.

One thing nobody tells you about Toronto – although everyone probably assumes you’re ready for it – is that by moving there, you’re admitting yourself into the chaos of the world. And that chaos, brought on by the infinite gears churning big city life, isn’t hard to find. You can’t commute to work without sidestepping it or look out your window without spotting it. Headphones and books and Sudoku can’t block it out.

Unlike smaller cities and towns that abide by a vague expectation of conformity, a place like Toronto is teeming with cogs and denizens. Most of them aren't troublemakers; they’re simply living unencumbered by said expectation. It’s an unspoken birthright for city folk: what’s unpredictable should be liberating, too.

As a newcomer, that spontaneity felt invigorating and dangerous. Going for summer evening walks, visiting friends and even shopping for a shower curtain became minor adventures – who knew what we’d stumble upon next? And that sense of possibility didn’t stay on the streets; it echoed up our high-rise at night in howls and bus moans, always keen to remind us where we were breathing.

You get out of a city what you give, as far as I’m concerned. The only reason to complain about any bustling, world-class city is that you suck at living there. And looking back, me at twenty-seven would’ve sucked at living just about anywhere. I was out of work, depressed and uninterested in doing anything beyond contributing music reviews and drinking wine. Nowadays Toronto feels like a brand new city; I can visit jazz clubs, catch seminars on everything from philosophy to religion to art and peruse the many bookstores throughout its labyrinthine neighbourhoods.

A year spent in St Catharines has given me no shortage of space and quiet to reassess the nature of urban life. I'll visit Toronto but a day-trip confirms that my time there is through. It’s too hectic and compressed to offer any sense of ownership, any moment’s peace. On the other hand there’ll always be St Catharines, where you can own a suburban acre and live free of any culture or community.

Still I think about the Big Smoke in springtime because it taught me that embracing a city’s chaos can make a true citizen out of you. A pioneer, even. There are compromises living anywhere but perks, too. Sometimes you need to leave a place to recognize what you could’ve forfeited, what you had to gain. Sometimes you need to retrace your steps between two extremes to find the sweet middle-ground, a city wall in which your name fits proudly amongst the carvings.