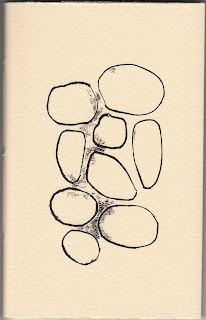 Is it possible that Nelson Ball hadn’t written a poem called “Fall” until now? Hard to believe, given the author’s knack for seasonal changes and brevity. But knowing what to expect from a new Nelson Ball collection doesn’t dull its anticipation. With each recent title from the prolific, Paris, Ontario based author, we’ve been gifted stunningly clairvoyant poems in Ball’s minimal style. And Small Waterways is perhaps the sharpest, accenting stark vistas with almost imperceptible, existential flourishes that balance his explicit sadness with a renewed acceptance.


Beyond the smidgeon of verve added to these immaculate lines, Apt. 9 Press delivers something really unexpected: an addendum of notes in which Ball discusses the background of several poems, his relationship with Catherine Stevenson and her resulting film, Nelson Ball & Barbara Caruso | Home Project | A photo documentary. Rarely do we get to read so much from this author’s pen in one sitting — and all in a chapbook, no less.
Labels: Apt 9 Press Fave Poetry of 2015 Nelson Ball