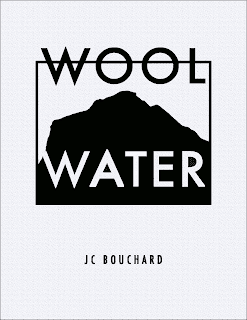 I began the year reading The Grey Islands by John Steffler. It’s a remarkable book that, released in 1985, falls outside the consideration pool of even a slow reader like myself. Alas, poetry about isolated men coming to terms with nature became a recurring theme throughout my reading this year and oftentimes serendipitously. Wool Water is my favourite of the bunch, in part because it’s the first extended stay I’ve had in JC Bouchard’s work — all else being one-off poems — but also because this sturdy chapbook has no one-off poems. Roman numerals are on hand to punctuate Bouchard’s timeline but they act more like transition wipes in the mies-en-scene of an adventure in Iceland.


It’s a solitary excursion, ostensibly shared with other tourists but gleaming nothing from their presence. Just as well, the distance from home and relative isolation are not framed as excuses to probe some unresolved event that jettisoned him north. No, Wool Water records how humans grapple with landscapes either inconvenient or inhospitable, and in a way that makes readers — visually cut-off from his experiences — marvel from their armchairs. Interaction with nature in its primary language — the physiological properties of water, earth and air — keeps Bouchard in the present, his language alert to each moment. Almost like a survival instinct, Wool Water abandons the commentary that would result from processing these experiences, giving us an unblemished meditation on environment and quietude.
Labels: Fave Poetry of 2015 JC Bouchard words(on)pages