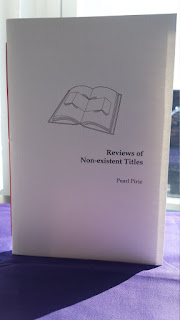 Practicing criticism in Canadian literature is commonly described as “thankless” and, though sometimes true, that gripe supports a rather dire depiction of the lonesome critic struggling for some altruistic good. Yes, reviewing can often feel like a long and arduous conversation with oneself, but those of us who scour over books and chapbooks aren’t immune to small pleasures in the process. Reviews of Non-existent Titles pokes fun at such notions of self-seriousness, while also targeting some quirky cliches among writers and wannabes.

It’s an enticing premise that Pearl Pirie explores, rendering what might’ve been a fun, conceptual exercise into a meta-mirror on the creative domain of poets and critics. There is some risk of pissing in one’s own pool, to that end, though I’d be lying if I said that didn’t give the chapbook some added intrigue. Luckily Reviews of Non-existent Titles errs on the side of irreverence and — much like the spirit of the popular NewsforPoets Twitter account — prefers sharp tongued satire to gatekeeper-ish policing. And like all good satire, it begs an honest glance: are Pirie’s made-up reviews really exaggerated or rooted more in reality than we’d care to admit?
Labels: Fave Poetry of 2015 Pearl Pirie shreeking violet press