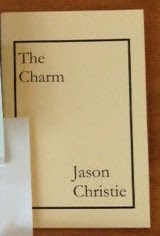 
Jason Christie’s third above/ground chapbook in three years foregoes the overarching themes of Government (2013) and Cursed Objects (2014), opting instead for small, conversational indulges. Not to say that these are one-off poems, nor that they bask in niceties. The accessibility that renders “i don’t understand how the internet works” and “i’m putting all of the punctuation back into this poem” as both poem titles and first lines therein cannot take credit for the heft these admissions carry.

Beyond tinkering to get his language simple to the point of profundity, Christie’s charm is the razor sharp way he exposes nature in artifice, and vice versa. (This uncovered theme distinguishes subconscious gestures from verbal communication in “we’re no longer speaking” and parses mission statements out of covert poetics in “this poem was once in a section called customer service”.) It isn’t so much about what Christie takes from these small discoveries, but how he guides us to reflect on them in our own lives. Getting into the reader’s headspace is a difficult task made all the more impressive when it looks this effortless. As a result, the metaphor-free “i am not a young man” is my favourite love poem in a long, long time.
Labels: above/ground press Fave Poetry of 2015 Jason Christie